A big part of learning to speak Spanish is an understanding of basic grammar rules — and one of the first things you’ll need to know is Spanish verb conjugation.

Let’s start with the most important question: why is it important to learn conjugation? Conjugation enables us to use verbs to describe real live situations and events.

Without knowing how to conjugate verbs we would not be able to form coherent sentences. Just like in English, conjugating verbs (along with other Spanish grammar basics) is essential to learning the language.

Even though most native English-speakers don’t know this, we conjugate verbs all the time in English. Let’s use the example of the verb to watch in English. To conjugate it, we say:

As you can see, verb conjugation in English is quite simple. Almost all English verbs only have two variants when conjugating (i.e. watch vs. watches), with the exception of the verb to be which has three variants:

How to Conjugate Spanish Verbs

Spanish, on the other hand, always conjugates verbs into five variants. Let’s use the same example of the verb to watch in Spanish, which is mirar.

Again, as you can see, Spanish breaks down verbs into five different ending variants, which can feel overwhelming and confusing. Learning how it works can appear complicated at first, but luckily you can use the formula below that makes it so easy, it will become second nature.

Start with the following three steps to conjugate Spanish verbs:

How to Conjugate -ar Verbs in Spanish

How to Conjugate -er Verbs in Spanish

How to Conjugate -ir Verbs in Spanish

Here’s a great Spanish verb conjugation chart from Spanish411.net that summarizes these rules: 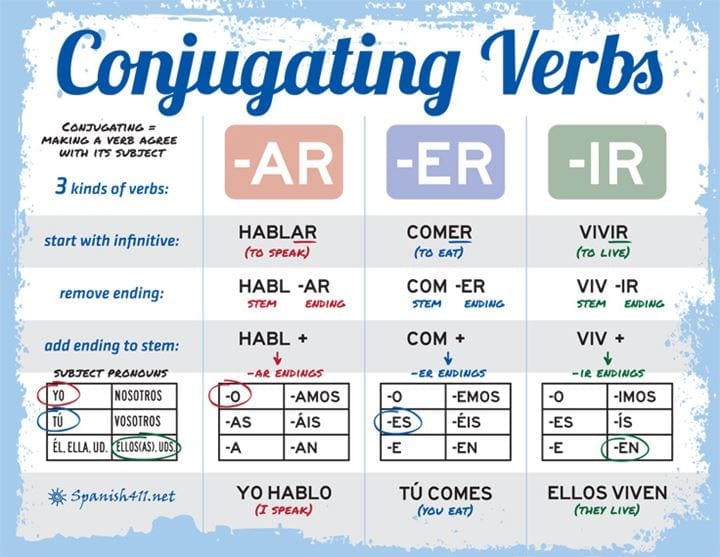 Use a simple chart like the one below, and practice conjugating each of the verbs.

It seems easy, right? The formula is straightforward but it does get a little tricky when the verbs are “stem-changers” or irregular, which a Spanish tutor can help you understand in more detail. Additionally, conjugation in Spanish varies significantly when the tense changes to past or future.

As you’re working on your Spanish conjugation practice, you may notice that some charts have a space for vosotros conjugation, while others don’t. Spain is the only Spanish-speaking country that actually breaks down verbs into six variants, not five, which commonly isn’t taught in Spanish classes in the United States. Here, Spain makes a distinction between “they” and “you all,” which is used interchangeably in all other Spanish-speaking countries, as speakers use contextual cues to decipher the difference.

Check out the CoolJugator, a free online Spanish verb conjugator that makes practicing easy. Search for any verb, and you’ll see all of the conjugations, as well as examples in Spanish along with the English translation.

Photo by The LEAF Project

Try one of our most popular online Spanish classes for free

Provide better care to your Spanish-speaking patients by assisting them in their own native language. Learn how to greet your patients, understand their symptoms, give common diagnoses, and more in this interactive online group class.
Sat 5/5 @ 5:00pm PDT Learn More

How to Describe Yourself & Others

This online Spanish class will introduce you to the common verb “ser” so you can learn how to describe others. An expert instructor will also cover adjectives to describe physical characteristics. This new vocabulary will make it easier for you to talk about your family and friends, as well as understand others when they are doing so.
Fri 1/21 @ 7:30am PST Learn More

In this class, you will review, practice and learn Spanish vocabulary by playing the popular game, Scattergories. We will do three rounds of different categories in Spanish. I will provide the categories that you will be able to view on the screen along with a timer. When the time is up, we will go over answers, correct spelling, use some of the vocabulary in sentences, etc. This is an interactive, productive, fun class you will not want to miss.
Fri 1/21 @ 8:30am PST Learn More

This online Spanish class will give you a firm foundation of skills so you can start your journey to fluency on the right foot. After this class, you’ll be able to introduce yourself and others in Spanish. Proper pronunciation and spelling will also be covered so you can develop both speaking and writing skills. Lastly, identifying words that sound similar in Spanish and English, also called “cognates,” will help you master even more vocabulary!
Fri 1/21 @ 11:00am PST Learn More

Current events are an excellent way to practice your conversational Spanish. In these group Spanish classes, your instructor will lead the class in discussions surrounding technology, health, and the upcoming holidays. Soon you’ll be incorporating Spanish in your daily life!
Fri 1/21 @ 12:15pm PST Learn More

Trying to communicate with a Spanish-speaking student or even with their parents can be challenging. Especially when we are trying to help them succeed. We will be going over school life and how to give instructions. As your ability to understand and speak Spanish improves, you can use your knowledge to help your students improve their knowledge of English.
Fri 1/21 @ 1:00pm PST Learn More

Let's get you prepped for meetings, emails, and other office situations. Learn to prepare a meeting, discuss differences of opinion, and find solutions to problems. You will also learn to correctly formulate formal and informal emails, presentations, and more.
Fri 1/21 @ 5:00pm PST Learn More
Learn Spanish Free Today

Get more from
TakeLessons Live